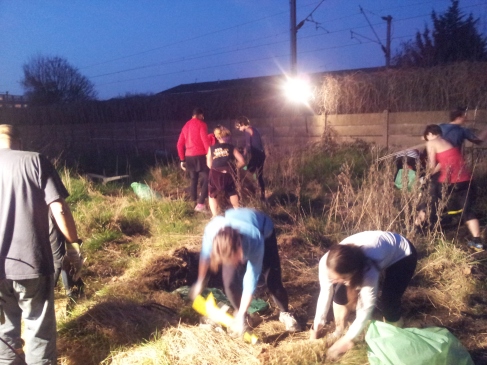 On Monday I got another chance to lead a Good Gym mission, this time on my own turf in Hackney where I lead my walking/running/cycling tours. With 12 volunteers we headed north from Bethnal Green and up to N16 while the ever-amiable Arthur took up the vital position role of ‘tail end Charlie’: ensuring there were no stragglers and the group kept together en route.

After a steady run at a reasonable pace with everyone easily chatting while they cruised together, we wound our way up Amhurst Road and into the Beckers, where Gemma and Paul were waiting for us with floodlights ablaze and pitchforks all lined up to go.

Tonight’s mission was the sequel to a previous Good Gym expedition which had started to clear an overgrown area surrounded by blocks of flats. The space is to be used as allotments by the local community and key to this is having the space cleared of junk (done) and weeds.

As always, the crew pitched straight in with no messing about and the forks were fairly flying. For an hour we worked digging up the top layer; shaking off clumps of soil from the roots; bagging the weeds and dumping the bags. Commuters peered out from trains rattling past on their way from Liverpool Street to Cheshunt but we were too busy to return their gaze.

Gemma and Paul had thoughtfully laid on a supply of sports drinks and cereal bars and – with an hour’s digging bracketed by a 4.5k each way – we were glad of them too.

Soon enough, time was up and we tied up the last bags and said our goodbyes to a grateful garden posse. The job isn’t finished, but it’s a heck a lot further on than it was. ‘Many hands make light work’ could be the unofficial motto of the Good Gym.

Following the A10, the old Roman road that led to Lincoln and York, we ran through Dalston and a strangely empty Ridley Road. I say strange, because during the day it’s packed with market stalls, colour, noise – and smells! This is one of the spots where Oswald Moseley’s fascists shouted from soap boxes but were given short shrift by a Jewish population that has since moved north to Golders Green.

We didn’t hang about either and in no time we were back at York Hall. Mark thanked us and reminded us that there are plenty more runs and – of course – people in the community needing our visits. The project is fun, friendly but functional too. If you haven’t Good Gym’d it yet, you don’t know what you’re missing and it looks set to be copied elsewhere. If you want to see the original in action, we’d love to see you too!