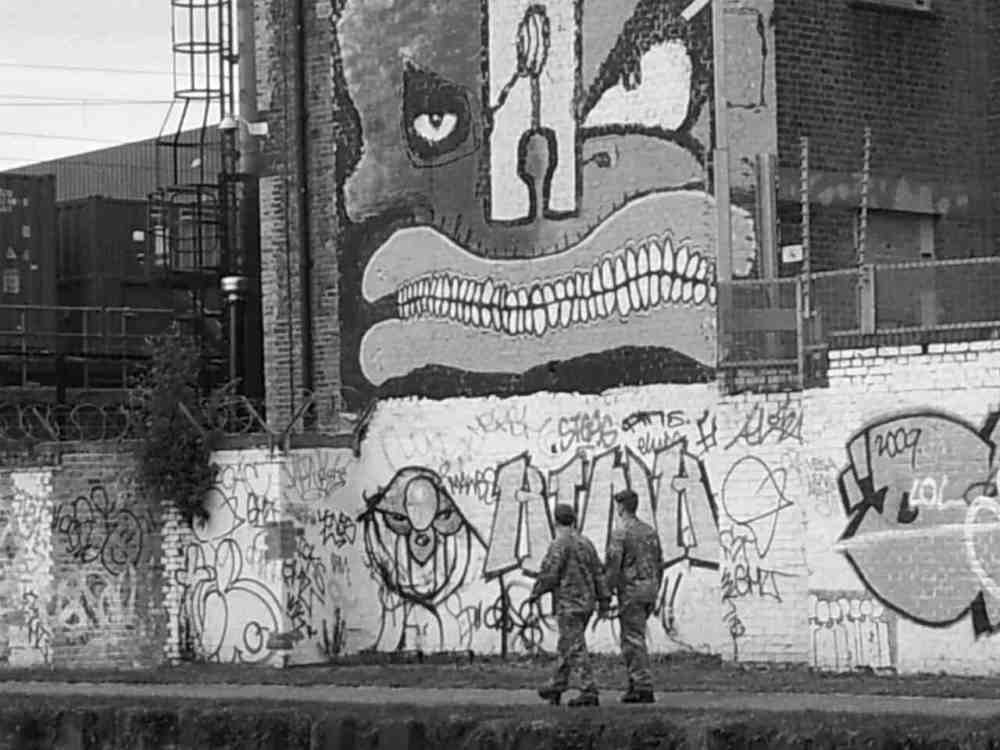 …is a series of photographs (scroll down) primarily from East London’s Hackney Wick but also Berlin. They highlight the intense security leading up to the 2012 London Olympic Games while provoking questions about what borders mean and the formats they come in. What is their role?

The former Victorian factory town of Hackney Wick, now with a huge concentration of artists living in its old warehouses, is where the Hackney & Tower Hamlets of the Industrial Revolution bumps up against the shiny post-Olympic future. On my alternative tours of the area, I returned repeatedly to this frontier and to what it might signify.

The photographs were taken with a mobile phone produced by one of the Games’ official sponsors. The second batch shown below (colour) contrasts the use of ‘softening’ Olympic magenta in East London with the functional concrete grey found on the Wall in East Berlin. And also with graffiti; the continuance of a traditional West Berlin response to East Germany’s ‘anti-fascist barrier’. Some of the colour captions have been taken from official sources and existing literature and reproduced here.

The first batch (mono) juxtaposes Berlin Wall (1961-1989) signage with the Olympic perimeter, accentuating the quasi-military aesthetic while the use of the phone’s black & white effect plays with the process of interpretation.

The use of colour to soften the security face of the Olympic perimeter is cancelled out and one’s sense of time and space is played with: are these photographs and their captions talking about now or the past? Berlin’s pre-reunification history or London’s present?

Low resolution shots of distant helicopters recall grainy 1970s images taken by military intelligence clandestinely photographing the other side’s equipment. Some of the shots here were also snatched; a consequence of the paranoia engendered by the presence of soldiers, cameras, patrolling security vehicles, marine police and helicopters.

Always helicopters: in the weeks leading up to the opening ceremony their constant drone was the soundtrack to this project. To the chagrin of many, the towpath cycle/walking route in front of the fence was closed at short notice and became No-Man’s Land patrolled by soldiers and private security guards; a ‘sterile’ strip before any intruders could even get to the high electric fence.

Constant helicopter clatter; rumours of drones so high you couldn’t see them and hushed mentions of SAS bunkers under the stadium; assets deployed; reconnaissance made; perimeter secured; observation points established; checkpoints manned; vehicles searched. A lexicon of occupation became visible only to locals and visitor, unseen and unregistered by the rest of Hackney and the other host boroughs, never mind a nation.

On the eastern side of the Berlin Wall, in the German Democratic Republic (GDR), unless you had special permission to live in the restricted border zones, you would never see the fence that kept you in. Funnelling from the designated train stations past the Olympic Republic showpieces, Stratford High Street was Karl Marx Allee; Westfield a Palast der Republik. Only the sharp-eyed would see the police spotters watching them from the telephone exchange roof or the outline of missiles on a Bow warehouse. You might not see them, but they always saw you.

A piece of graffiti in a preserved GDR watchtower in Hof says that today, the biggest walls are the ones “in our heads”; walls divide us economically and culturally as well as physically. Like the GDR, the Olympic Republic will have had its day. What will happen when the Hackney Wall falls?

The images below are best viewed in the gallery format. Click on any photograph to see them all  full-size.

If you want to really want to discover this part of the world – see and hear how it was in Victorian times, how different it may be in just a few years – and explore how complex the Olympic & gentrification phenomenon is too, then our regular tours are a great way to get under the skin of Hackney’s most interesting spots. We’ve got the Olympic legacy, Bow’s East End heritage and factory town turned artist community Hackney Wick. It’s the artistic hub of London today. But is it the new Shoreditch tomorrow?